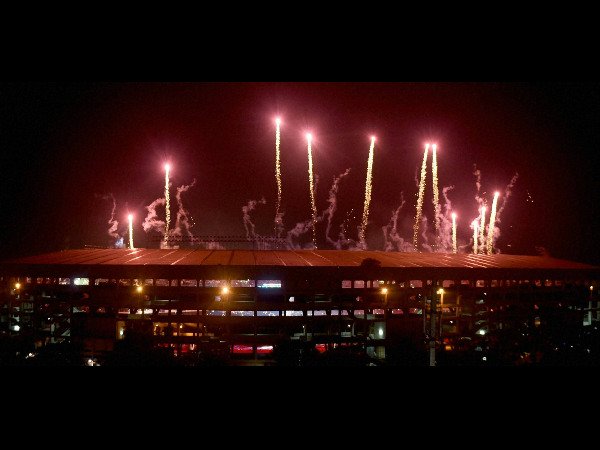 Heavy rain failed to dampen the spirit of ‘City of Joy’ as a dazzling Bollywood-style opening ceremony kick started the eighth edition of Indian Premier League (IPL 8) cricket after a one and a half hour delay at the decked-up Salt Lake stadium here today.

The event was a little subdued compared to the galas of the previous editions but the cine stars still managed to put up a show, enthralling the thousands of drenched fans who were glued to their seats.

The cheer was loud for Virat Kohli, louder for MS Dhoni but loudest for their ‘very own’ Gautam Gambhir. While Bollywood heartthrob Hrithik Roshan stole the show with his electrifying dance performance, leading lady Anushka Sharma brought on a lot of panache with her performance.

The versatile Farhan Akhtar and Shahid Kapoor regaled the crowd, both performing to their respective numbers from movies such as Rock On and Kaminey. Shahid hit a ramp slightly and then slipped on the stage before recovering quickly.

Of those from the glam world, Hrithik was the most sought-after as he gyrated to his hit numbers from Bang Bang and Dhoom 2. The eight skippers led by India captain Dhoni signed the MCC Spirit of Cricket pledge to start IPL 8 formally in front of Ravi Shastri before they posed for a formal group photo.

Bollywood then took centrestage with Haider actor Shahid making an entry in a motorcycle to the tunes of local hero Bappi Lahiri.

“Rain or shine the celebration will continue that’s how we love our cricket. Now we have a new season apart from monsoon, summer, winter and spring and that’s the season of IPL,” the anchor of the show, Saif Ali Khan, said in his opening address.

The Omkara star called out the captains of the eight franchises as the likes of Shikhar Dhawan, JP Duminy and George Bailey walked onto the dais. But it was the trio of Dhoni, Kohli and Gambhir who received the biggest applause as firecrackers lit up the Kolkata sky.