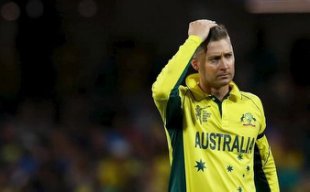 Australia captain Michael Clarke praised the “exceptional” Steven Smith after his side beat defending champions India by 95 runs on Thursday to set a World Cup final with New Zealand.
Steven Smith’s 105 and his second-wicket stand of 182 with opener Aaron Finch (81) powered Australia to 328 for seven after Clarke won the toss.
India were only briefly in the hunt and were eventually dismissed for 233, despite a run-a-ball 65 from captain Mahendra Singh Dhoni, who produced a match-winning fifty in the final against Sri Lanka four years ago.
“I feel really excited. Smithy was exceptional once again, and I was really proud of the execution of our bowlers,” said Clarke after a convincing win at the Sydney Cricket Ground where the impressive Mitchell Starc took two for 28 in 8.5 overs and James Faulkner three for 59 in nine.
Sunday’s final in Melbourne will give Australia the chance to avenge their one-wicket loss to New Zealand in a pool-phase thriller at Auckland’s Eden Park last month.
“Losing to New Zealand really gave us a kick up the backside,” said Clarke. “Mentally I think the guys are ready to walk into the final.
“New Zealand have been playing some great cricket, (captain) Brendon (McCullum) has done a great job.”
Smith added: “We thought 330 was around par, we knew we had to bowl and field well and the boys did a great job, so roll on Melbourne. It’s nice to contribute to a few wins.
“I hope I have more runs in the bank — a big hundred would be nice.”
India made a bold start to their chase, with the highest score ever made by a side batting second to win a one-dayer at the SCG the 334 for six made by Australia against England in 2011.
But once opener Shikhar Dhawan holed out for 45 off Josh Hazlewood, India struggled and even Dhoni’s brisk innings came too late to turn the tide.
“Overall Australia played very good cricket. Over 300 is a very big score to chase, but I thought it was just over par,” said Dhoni.
“Shikhar Dhawan was batting freely, he didn’t need to play the big shot. It was too many for me to chase.
“Our lower order really needs to work hard on their batting.”
The 33-year-old wicketkeeper-batsman hinted this may have been his last appearance at the World Cup by saying: “I’m not sure whether it will be my last World Cup.”
But with India having an enjoyed an unbeaten run to the semi-finals, Clarke said: “Huge congratulations to MS Dhoni and his team, I think they’ve competed really well in this World Cup.
“I’m pretty sure it won’t be his last World Cup, he’s got a lot of cricket left in him.”